Yesterday we had the pleasure of welcoming Christophe Jaume from Domaine Grand Veneur, Chateauneuf-du-Pape, to our offfice. 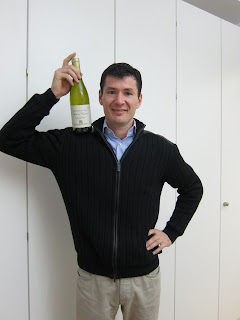 The 2010 harvest in the Rhône valley has been heralded as one of the great vintages. Indeed Robert Parker was quoted as saying:
"This is a great vintage that comes close in quality to 2007 in the Southern Rhône. Some producers think 2010 eclipses 2007 because of the wines’ vivid freshness and focus"
We decided to ask Christophe what he thought....
What makes the 2010 harvest so extraordinary in the Southern Rhône?
“Basically the ‘coulure’ of Grenache. The flowering of the Grenache was disrupted by bad weather just before flowering was due to happen and the Mistral wind didn’t help. As a result, many flowers (sometimes 60% of the bunch) were not able to develop, they dried and disappeared in June. The result was that the bunches were small - the smallest we have ever had at the domaine.
The result was that in 2010 the small bunches had plenty of aeration as there were much fewer grapes per vine. The grapes that did remain therefore had immense concentration. The excellent weather conditions during the summer and at harvest time, helped to further concentrate the flavours and intensity of fruit in the grapes. In short the 2010 vintage was phenomenal and the smaller cuvees have a quality higher than I have ever seen."
Christophe Jaume, Domaine Grand Veneur
Posted by Claire Scott-Gall