I was lucky enough to be invited to Bordeaux the other week by Maisons Marques et Domaines to stay at Pichon Lalande. Our small but perfectly formed team was made up of Mark Bingley, our host and Fine Wine director at MMD Ltd, Joe (Wine buyer for the WSET), Frank (Sommelier at The Ledbury restaurant), Scott (Bar Manager at The Wolseley), Christian (Chef at the Wolseley) and myself (Private Client Sales at Bancroft Wines)

In attendance: Amy, Alex, Claire
We had a lovely Wine Wednesday today, I think partly because we weren’t expecting it. There had been no mention of lunch this week, we are all far too busy working, coughing and moaning away for such frivolity. Alex had foresight though, he knew what was good for us and on the spur of the moment proposed a ‘relaxed lunch’ at the Maltings Café.
Read more »
Posted by Claire Scott-Gall 0 comments

Sherry - on a need to know basis

So it is largely felt that to be uncool is by nature, well... cool.  An oxymoron I guess that perfectly describes my recently discovered love of sherry. This is not a cool region, oh no, rather one which those on the inside of the wine trade seem to find impossible to resist.  As I write I feel myself drifting back in time to evenings spent at Bancroft’s local tapas bar in Bermondsey Street; José.  Warm summer evenings (yes, I think there were three this year and fortunately one of them was a Friday) spent enjoying a chilled bottle of crisp, refreshing Manzanilla and simply watching the world pass by.

Email ThisBlogThis!Share to TwitterShare to FacebookShare to Pinterest
Labels: Australia

Rugby/Wine Lovers loving tasting TRE wine with us at home!
It’s Rugby World Cup fever here and ahead of the French All Blacks game this weekend Roland has been busy entertaining wine lovers, mainly from France and England. They seem to like tasting the wine in our kitchen walking through the garden for more extensive tasting in the tiny winery. Last night four French guys from Paris and Bordeaux were blown away by the elegance and pure expression of fruit in all the wines.

We are very pleased that three of our wines were chosen by Oz to feature in his recently released book “250 Best Wines 2012”. 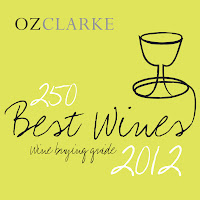 The results for the IWSC International Wine and Spirit Competition 2011 have just been released and we were pleased to find out that David Nieuwoudt's Ghost Corner Semillon 2009 received a Gold Medal.

“Pale gold. Nose bursting with green pepper, nettles and fynbos. Hints of smoky bacon and fine oak. Soft and creamy in the mouth with super smooth but lively flow across the palate. Firm , acidic freshness loaded with all the flavours the nose suggested. Absolutely delightful. Great now and should develop with great expression over next two or three years.”

Not content with making award-winning wine in the Cederberg, David Nieuwoudt spotted the huge potential of Elim, a small and extremely promising maritime region within the Cape Agulhas district, close to South Africa’s most southerly point.

Elim was established in 1824 by German missionaries as a Moravian mission station. When selecting the location, the missionaries placed a high priority on the proximity of water and on terrain that was suitable for planting vines so that wine for communion could be produced. The village is picturesque and has changed little over the years. It is filled with whitewashed cottages, fruit trees and fynbos. All the roads in the village lead to the thatch roofed church. The community, still mainly Moravian, consists of farmers, farm workers and artisans. Elim is becoming known for the export of fynbos and as an emerging area in the production of wine.
Only produced in minute quantities, the inaugural vintage of Ghost Corner was met with instant rave reviews upon release and sold out immediately. The Semillon spent a short time in barrel which has given it an amazing smoky, fumé nose. The palate is fresh and zesty with grapefruit and lime fruit, with a hint of smoke on the finish. It has the unique distinction of being awarded a SA Terroir Award for the best Semillon in 2008, 2009 and 2010 vintages.

In attendance:  Most of the office!
They say (I think) that a change is as good as a rest but as far as Wine Wednesday is concerned we have had both and to be honest I am slightly unsure of the result.
There is so much to say about where we have been and what we have been doing and why it has been so long time without a blog, but nothing that seems more pressing than to say, as Wine Wednesday goes things ain’t what they used to be.  First of all, on this Friday, only Alex was there in the Court Yard waiting for me.  Next I learned that Rob Allen was joining us for, and wait for it, a walk to Borough Market for a quick pint followed by a trip to the cheese shop to buy some picnic supplies so that we could have in lunch in the office.  Really Bancroft? Really.  What happened to the lovely Maltings Café, with the nice staff and tables and chairs and ya’ know, lunch? A glimmer of familiarity though, the infamous Robertson charm prevailed, apparently I looked like a farmer and a witch.
Read more »
Posted by Claire Scott-Gall 0 comments

Cederberg Wines - the range of wines and their Five Generation wines

Cederberg talk us through their flagship wines, named Five Generations (as the farm has been in the family for five generations)

David Nieuwoudt on You Tube - Sauvignon Blanc and Bukkettraube