Schild stories: what lies behind the wines

I've always maintained that one of the reasons I love to work in wine is because of its window on the world into different countries, cultures and customs. Each one unusual, everyone different. What never fails to blow me away are the stories and the people connected to each bottle - no matter whether they're the ones you're enjoying the wine with in the moment, or the people who've helped to make it. 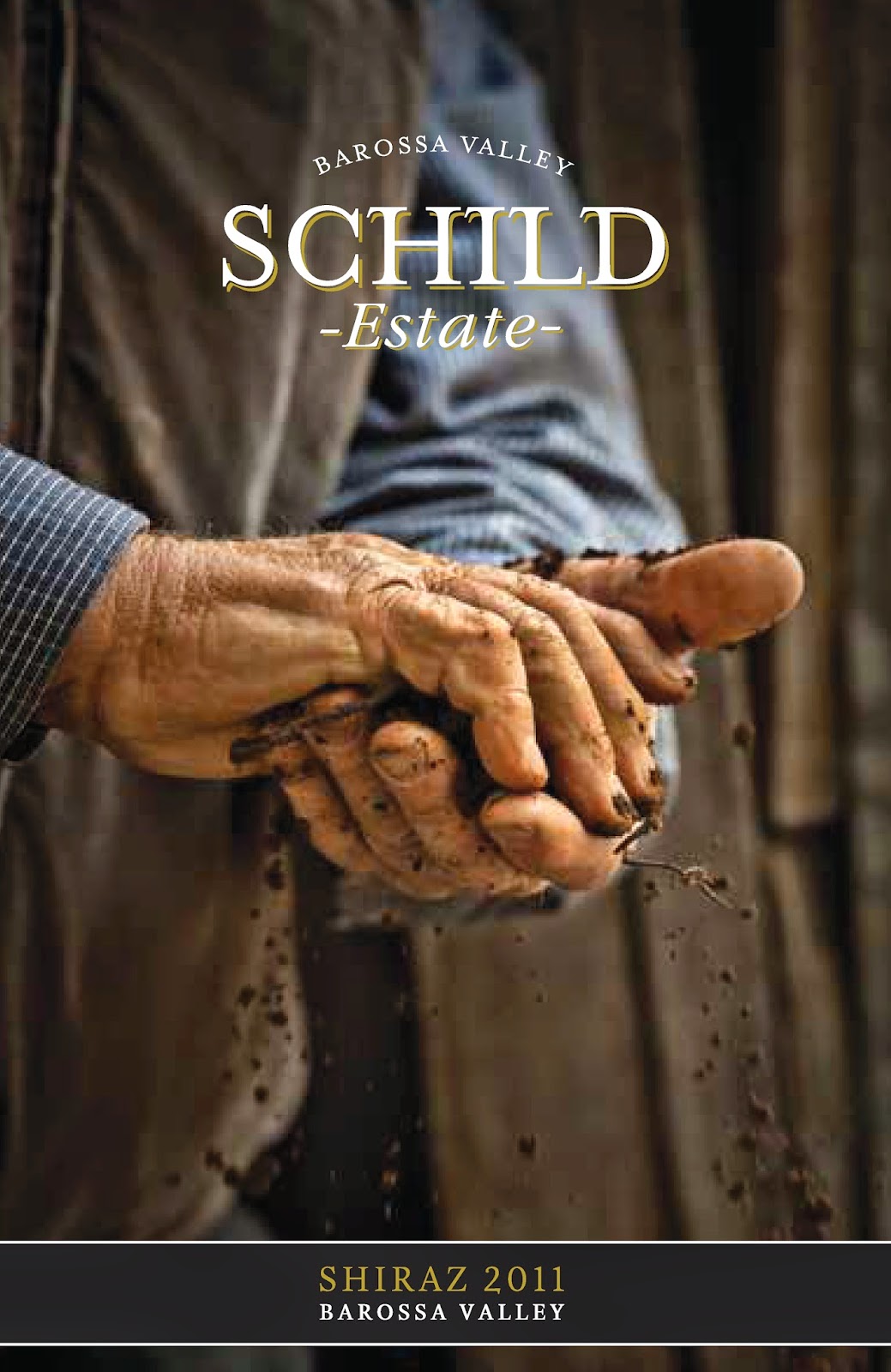 Case in hand, a couple of weeks ago I got to meet Judy Watson, née Schild, from the eponymous Schild Estate, one of Bancroft Wines Australian wineries, set deep in the heart of the Barossa. I got to know her most during this visit - her first ever to London, at a media lunch organised at Fulham's Harwood Arms. It was a great opportunity to chat and get to know the person behind the wine, but also the stories that continue to make them. Cleverly, these are documented through the wines new and improved, award-winning labels. 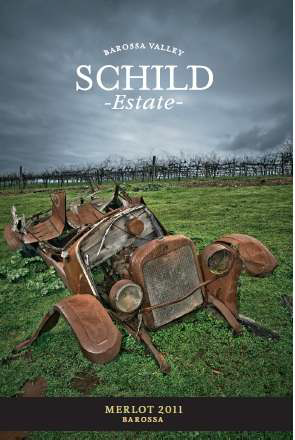 Judy talks about the heritage of the winery that as a member of the family's third generation she is very much still a part of. Judy's grandparents Ben and Alma Schild first moved to the Barossa Valley from Lameroo in the Murray Mallee in 1952. This fateful moment is documented on the merlot bottle - showing the clapped out old car that Ben Schild drove Alma and his 8 children to their new home in the Barossa’s Rowland Flat. The car still remains where he parked it to this day.

In 1956 Ben Schild died suddenly and Ed, being the youngest of eight children and the only son to be living at home, stayed to run the family property at the age of 16. The new label on the Shiraz pays homage to his hard work since then, depicting his real hands working the soil on which his vines grow. "Weathering highs and lows, Ed Schild worked to grow a down to earth family business of vignerons." In happy harmony, the wine is from the Barossa floor, from the foothills where the family first laid their own roots - it has an elegance and finesse that is rich with juicy, ripe fruit, a lick of liquorice and on the finish, some well integrated spice. 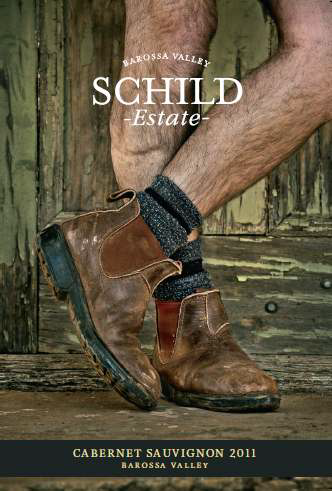 The first vineyard that the family purchased is located up the top of Steingarten Road, near Rowland Flat, where the original homestead is still situated.

Michael Schild is pictured on the label for the Cabernet Sauvignon - as the winery's chief viticulturalist he has followed in his father’s footsteps after coming home from school to help him prune, shift soaker hoses and pick grapes. "I was about 15 when I left school to follow this vineyard interest a little further. Once we bought a grape harvester, the work really began… it was then that dad started to buy more vineyards….and so on it went. Later I met my wife and we have three little darlings, whom are all keen to follow in dad's interests… they had no choice, they grew up in the vineyard like me."  Michael's love for fishing is depicted on the bottle of Riesling - citing a feed of yabbies as the perfect partner. We taste this later in the office - it has citrus and lime wax on the nose, a cool climate riesling, "just 6 miles short of the Eden Valley". It's cool and crisp and wholly drinkable. It makes me reminisce about my choice of wine on rare night's off from nightshifts when I worked vintage in Australia's Riverina. 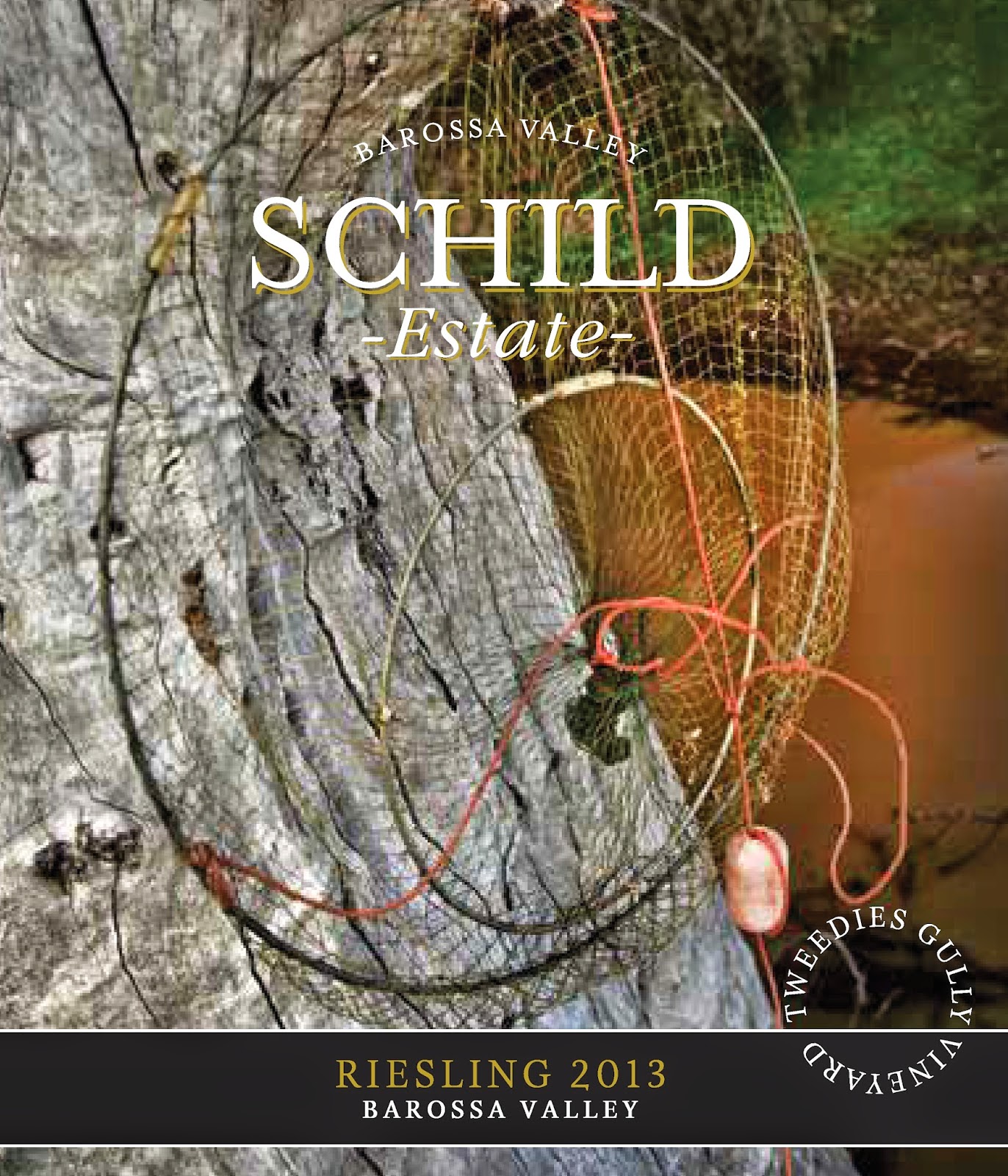 Judy is the eldest daughter of Ed, current owner and is known as the mother hen – the label of the Unwooded Chardonnay was designed with her in mind. This wine is soft and buttery but is still refined. It speaks with apples and limes on the palate and is almost lime green in colour. Judy represents the third generation of the family to work and own the vinyeard - a strong message to anyone making commercial wine, and one that is echoed on the label of the GMS. 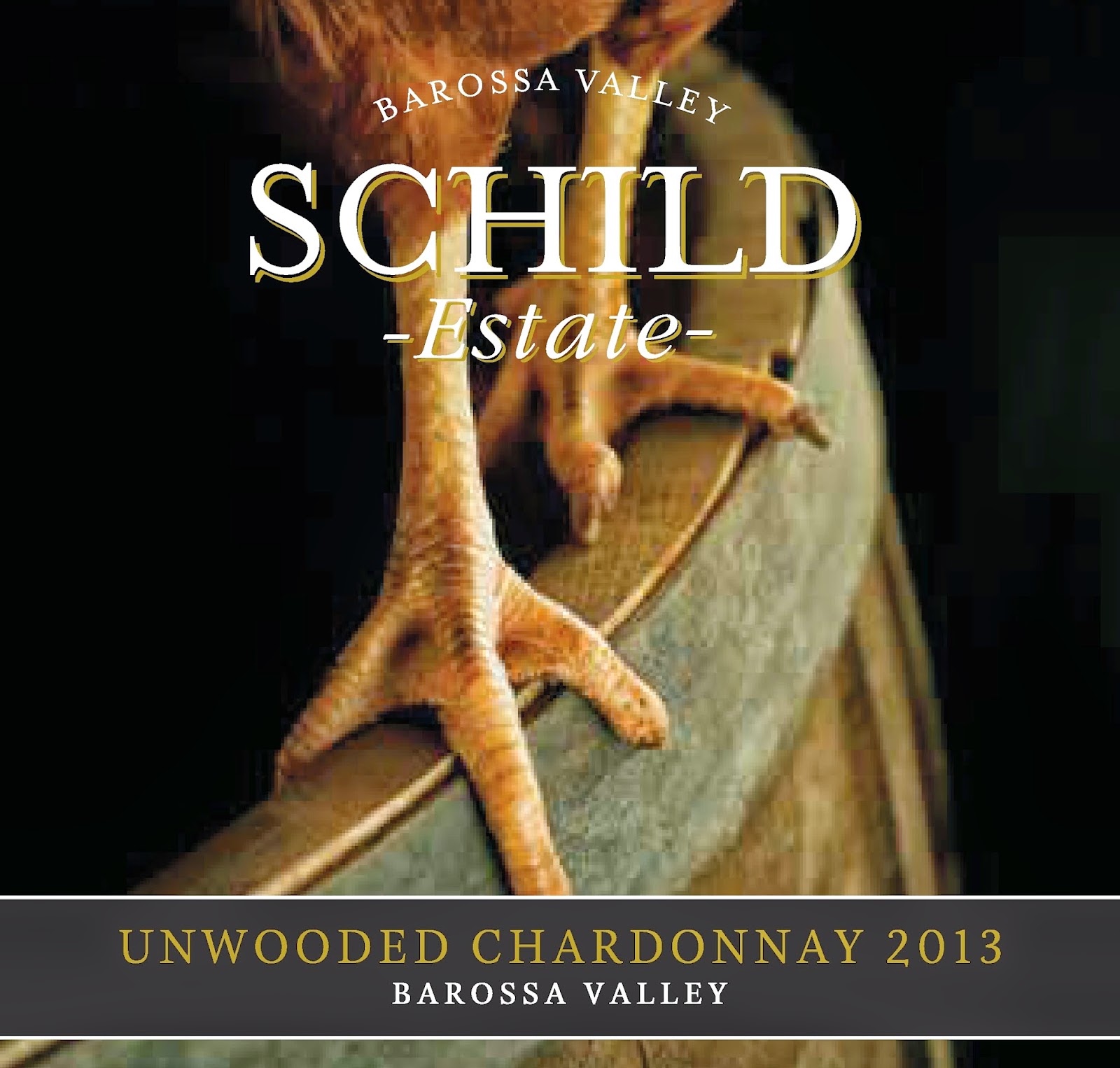 The GMS - Grenache Mourvedre Syrah is made from 100 year old vines with grapes that are hand-picked. This winery crushes 1000 tonnes a vintage, so it is by no means enormous. What speaks from the bottle then is this history and attention to detail in getting the best out of the fruit available. Set slightly at altitude the vines here are in a cooler climate with a lower yield. It sees no oak and shows elements of white pepper. It is fruity, well-made and has a touch of black pepper spice. Of the range it is my clear favourite. The three hands here show each of the generations that make up the winery's greater personality today. 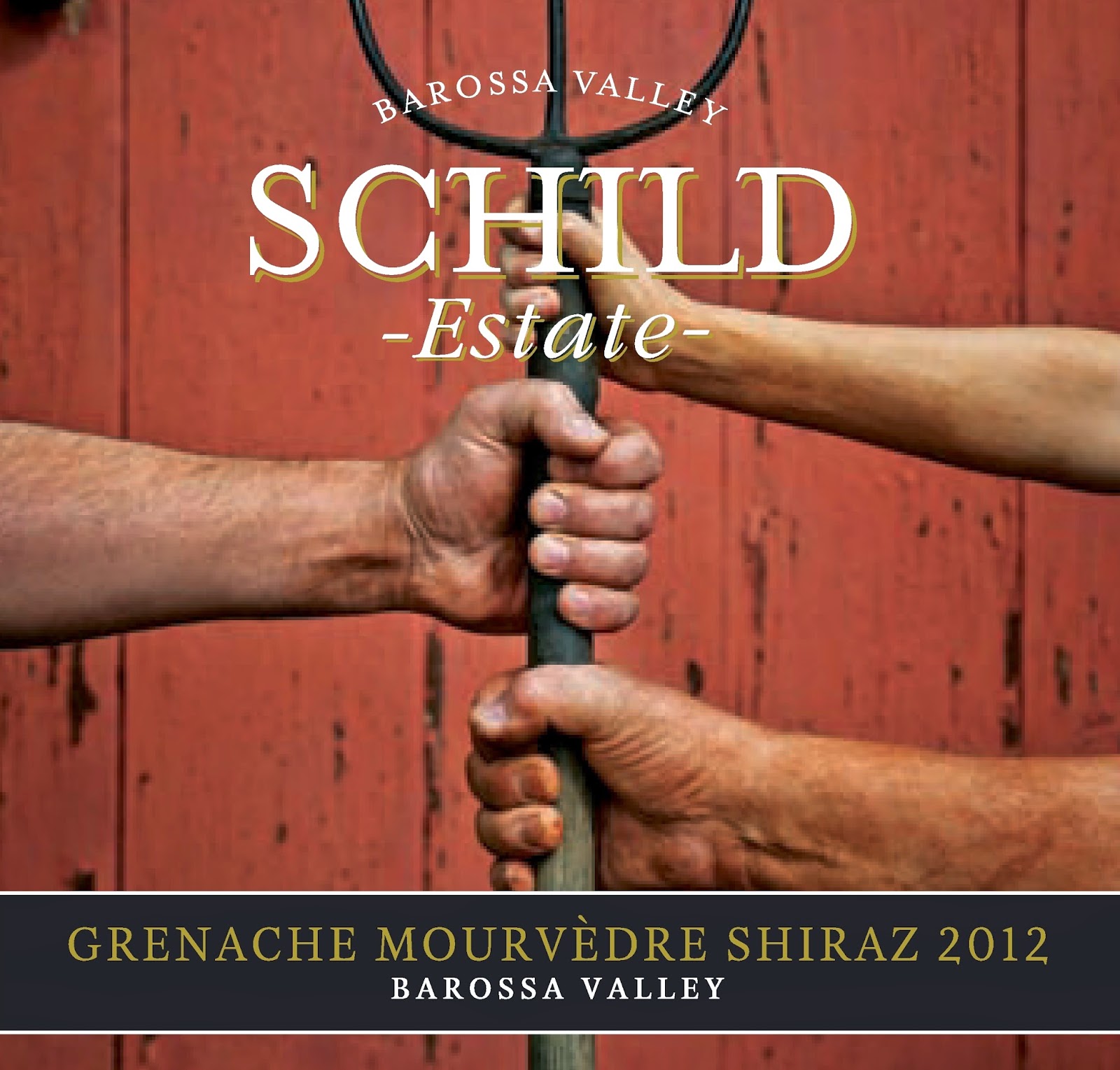 The Semillon Sauvignon Blanc shows an image of an old car seat in the shed - this was where the vintage crew ended their day. Inside they reclined on old car seats, drinking ice cold hock, lime and lemonade. A nice inside, fly-on-the-wall type image to add into the overall scene we can now imagine much more without having been there ourselves... This is the window I'm talking about. 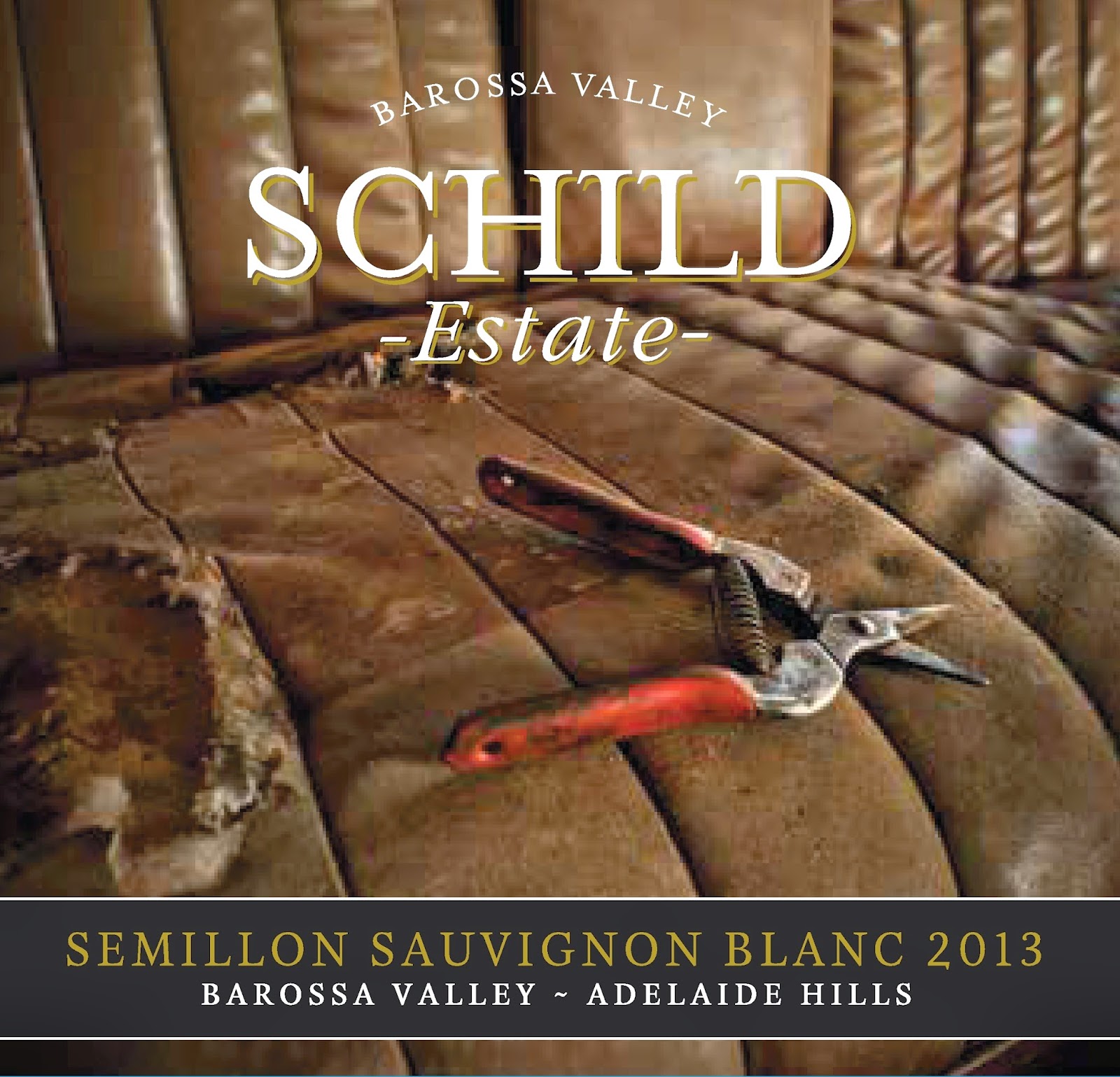 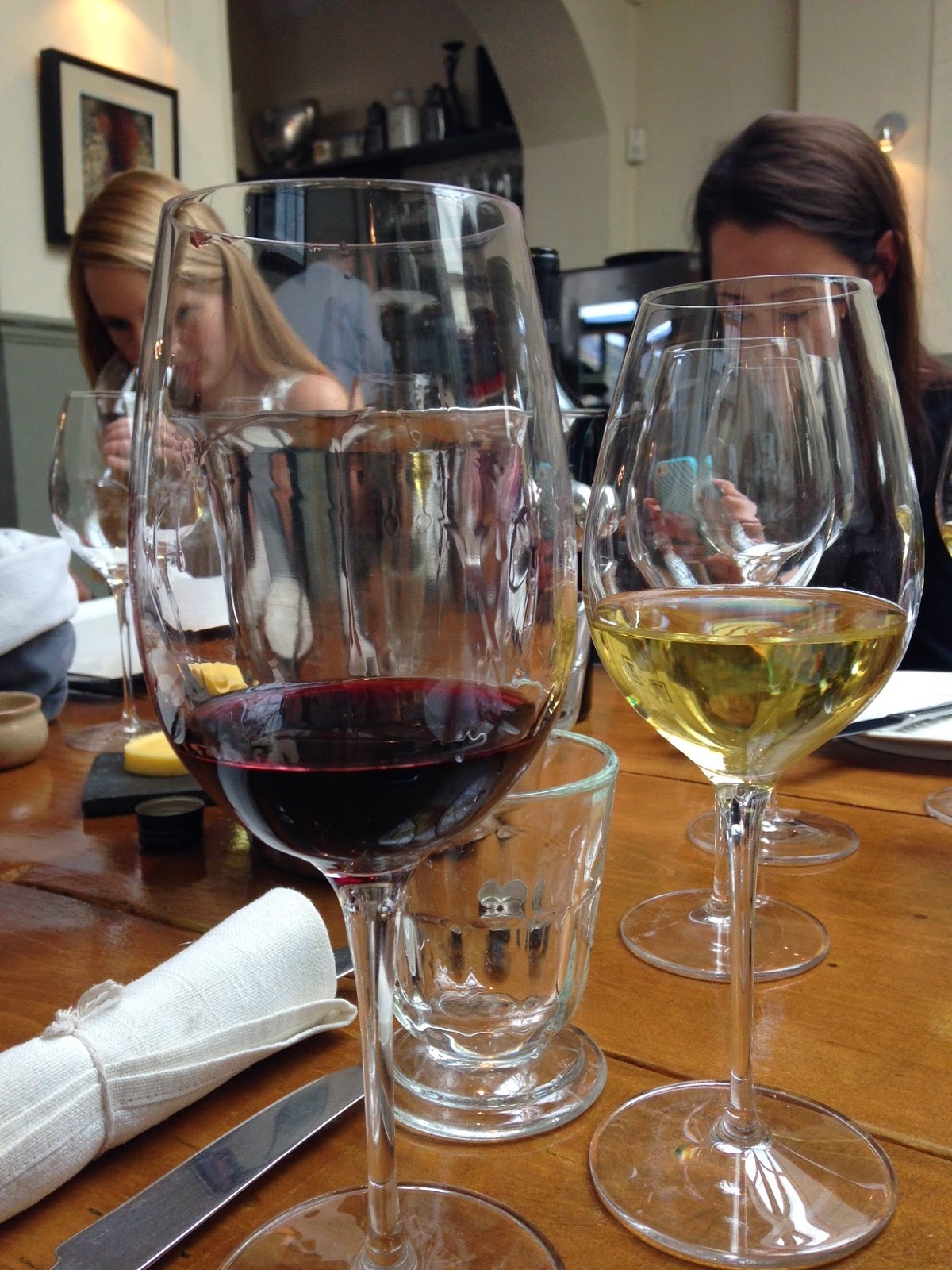 At lunch, the last wine we taste is the flagship wine from Schild - the much revered Moorooroo - a wine that comes from ancient vines -165 years old. This irreplaceable vineyard was planted by Johan and William Jacob in 1847, just eleven years after the foundation of South Australia and at one point, nearly ceased to be. In 1984 at the height of over supply of Shiraz grapes the government was paying people to rip up their shiraz vines. Schild at that point had 16 rows in the Moorooroo vineyard. 12 of them were ripped out but at the last four rows the tractor broke down, leaving them there, untouched. These four rows are the ones that still produce the Moorooroo today - a very special wine indeed. Judy mentions that sometimes people ask if you can still make good wine from old vines - to which she gives this analogy. "You ask my 19 year old son what his take on life is and he'll give you one answer. You ask a person closer to 99 years of age and they'll give you a completely different answer." there's no denying that age and experiences enriches a person and their own stories, the same, she says goes for the vines. 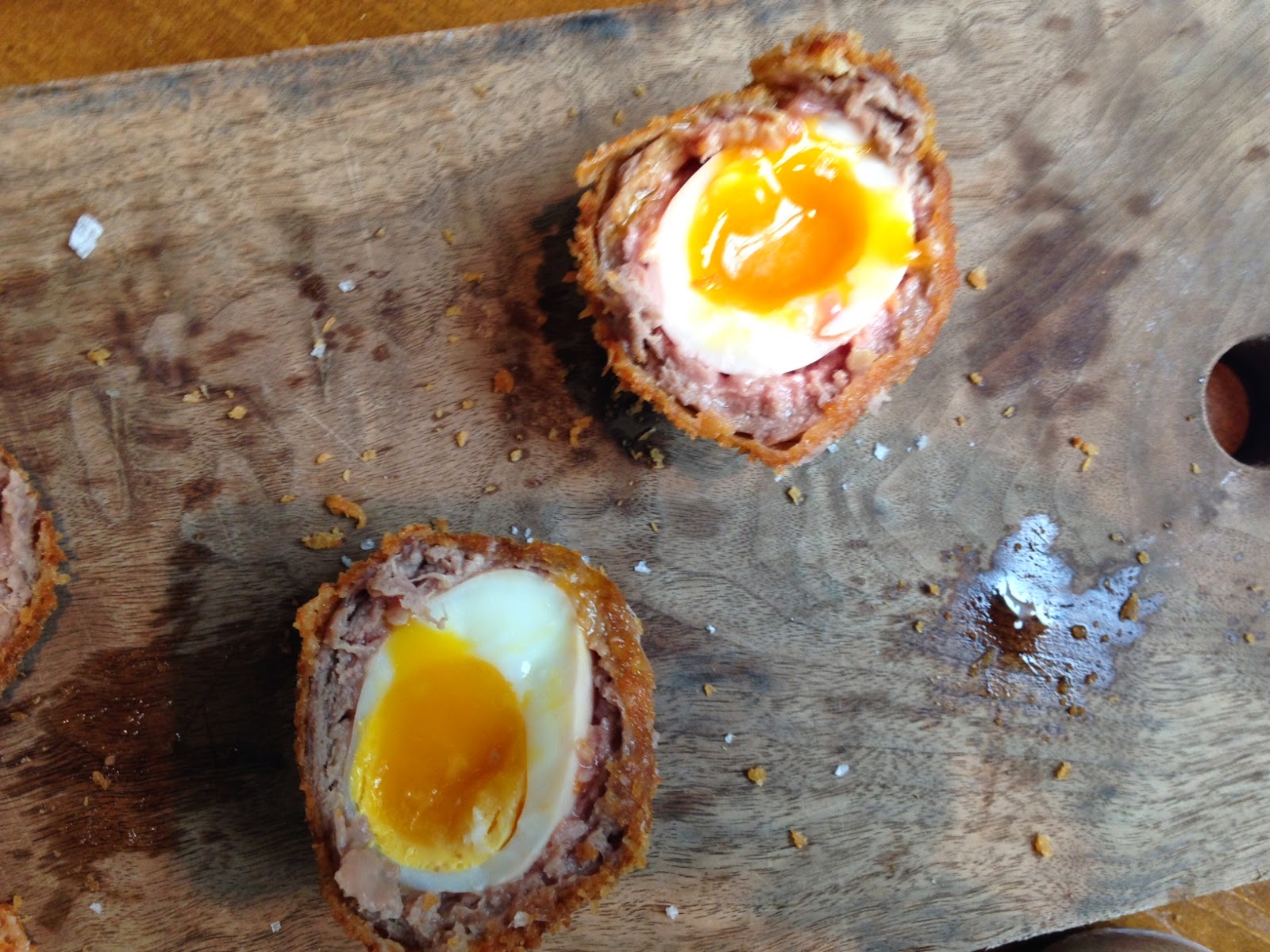 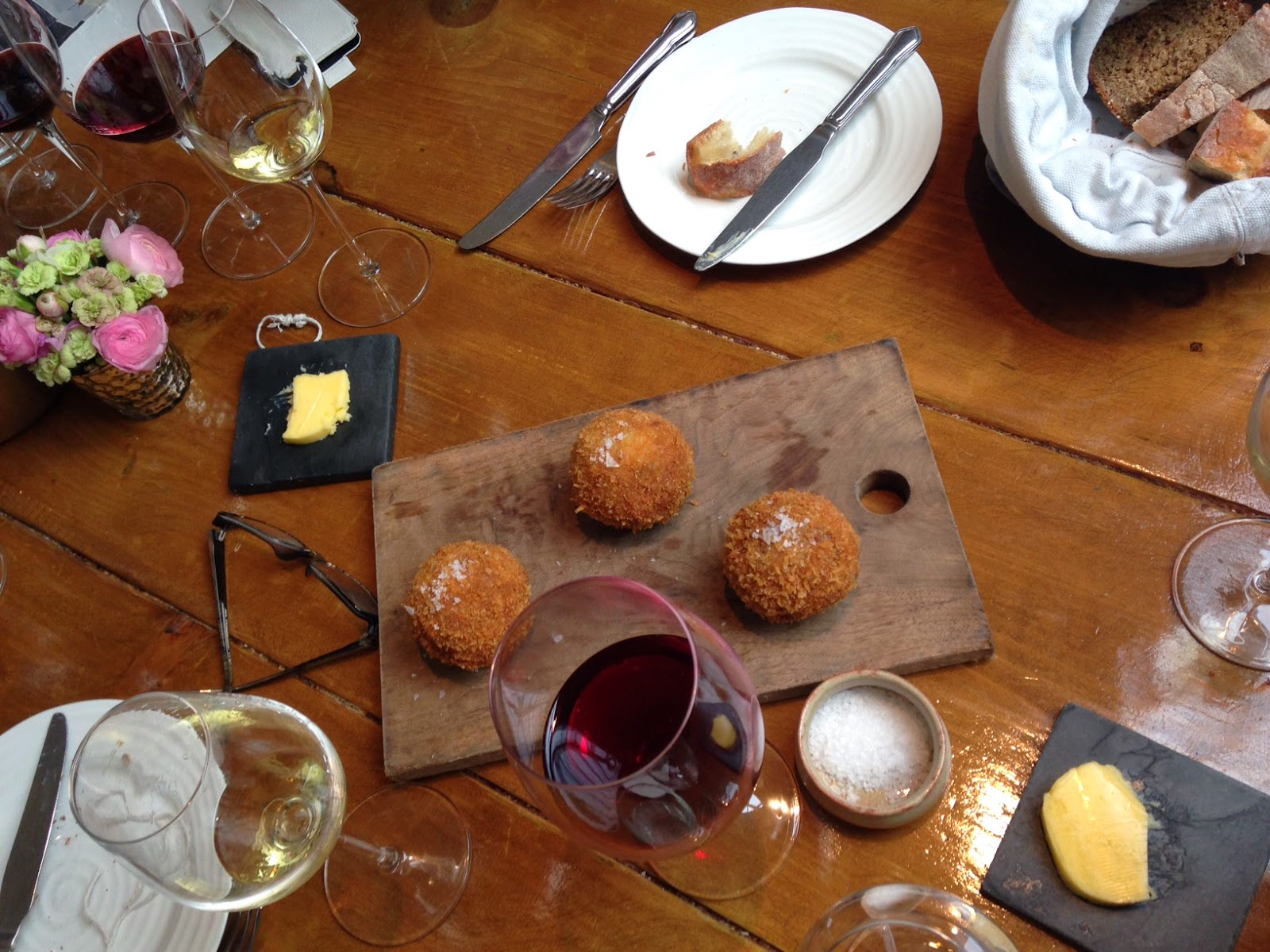 When we meet Judy today not only do we learn about each other's stories, we hear other people's from around the table (naked bungee jumping is just one that comes into conversation - for which I will never forget the golden, rich and ripe Alma Schild Chardonnay that got us talking about this), but at the same time create more of our own. It is here at the Harwood Arms that Judy tries her first Scotch Egg (and what a fine venison-clad one it was!) concreting this as a specific moment in time - another new experience in and amongst some very pleasant wine, great value company and equally dazzling conversation. But then that's what wine is all about - right?!
Posted by champagneonthebrain 0 comments

We're pleased to announce that our Beyond the Clouds 2011 from esteemed northern Italian producer Elena Walch has been awared 92 points in May's edition of The Wine Spectator. We recently served this bottle alongside another couple of our new Italian wines at a private event for Harrods - it was far and away the most popular wine of the evening.

In the article on the Trentino Alto Adige, Elena Walch's vineyard 'Kastelaz' was the accompanying cover image. A stunning piece of land that gives rich finesse to the wines produced.

Beyond the Clouds is Elena's flagship wine - made from her finest grapes. Although a blend, it is made predominantly from Chardonnay, aged in French oak barriques and undergoes partial malolactic fermentation. A beautiful wine that is intensely floral with fantastic richness and intensity. 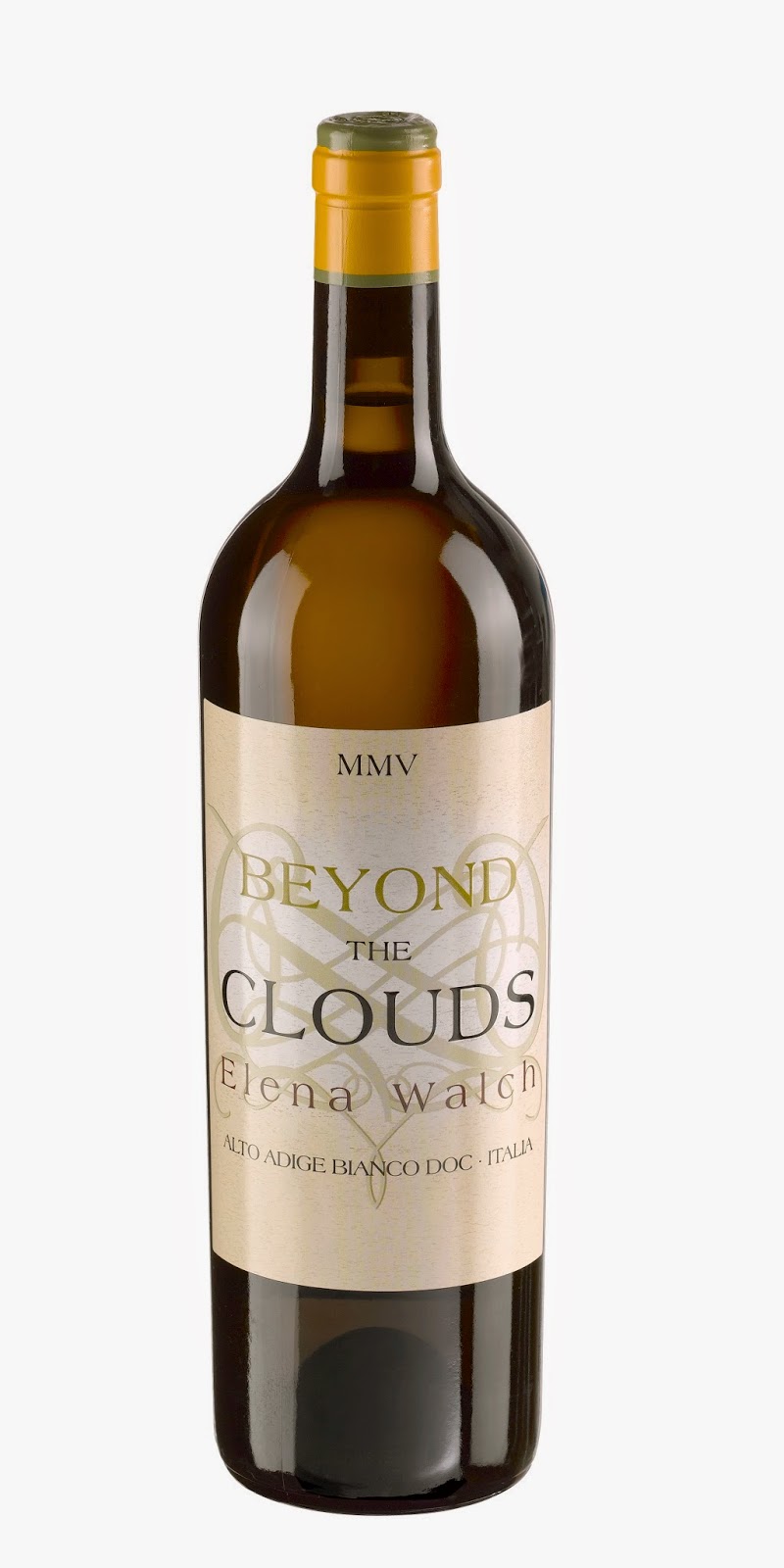 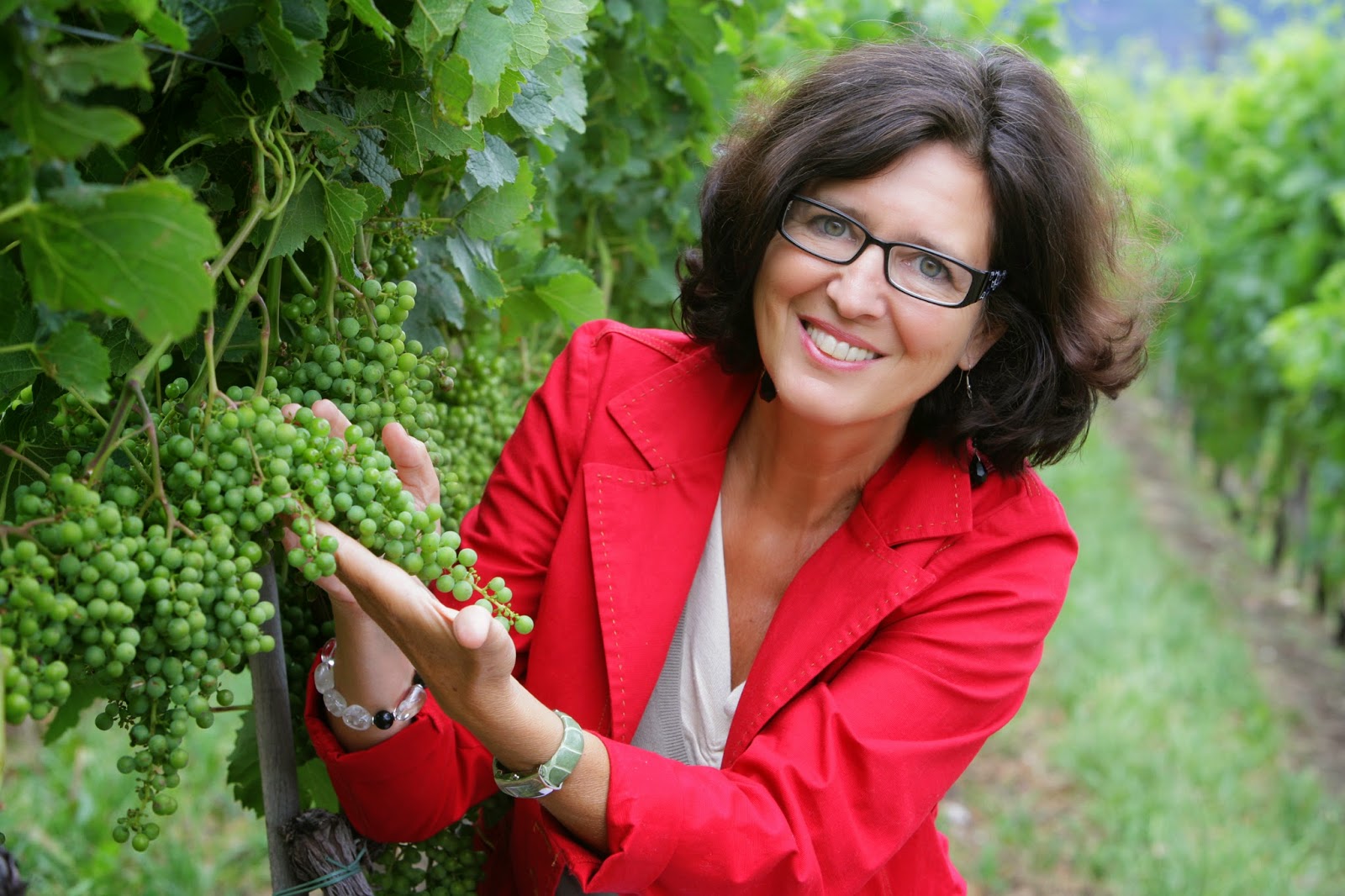 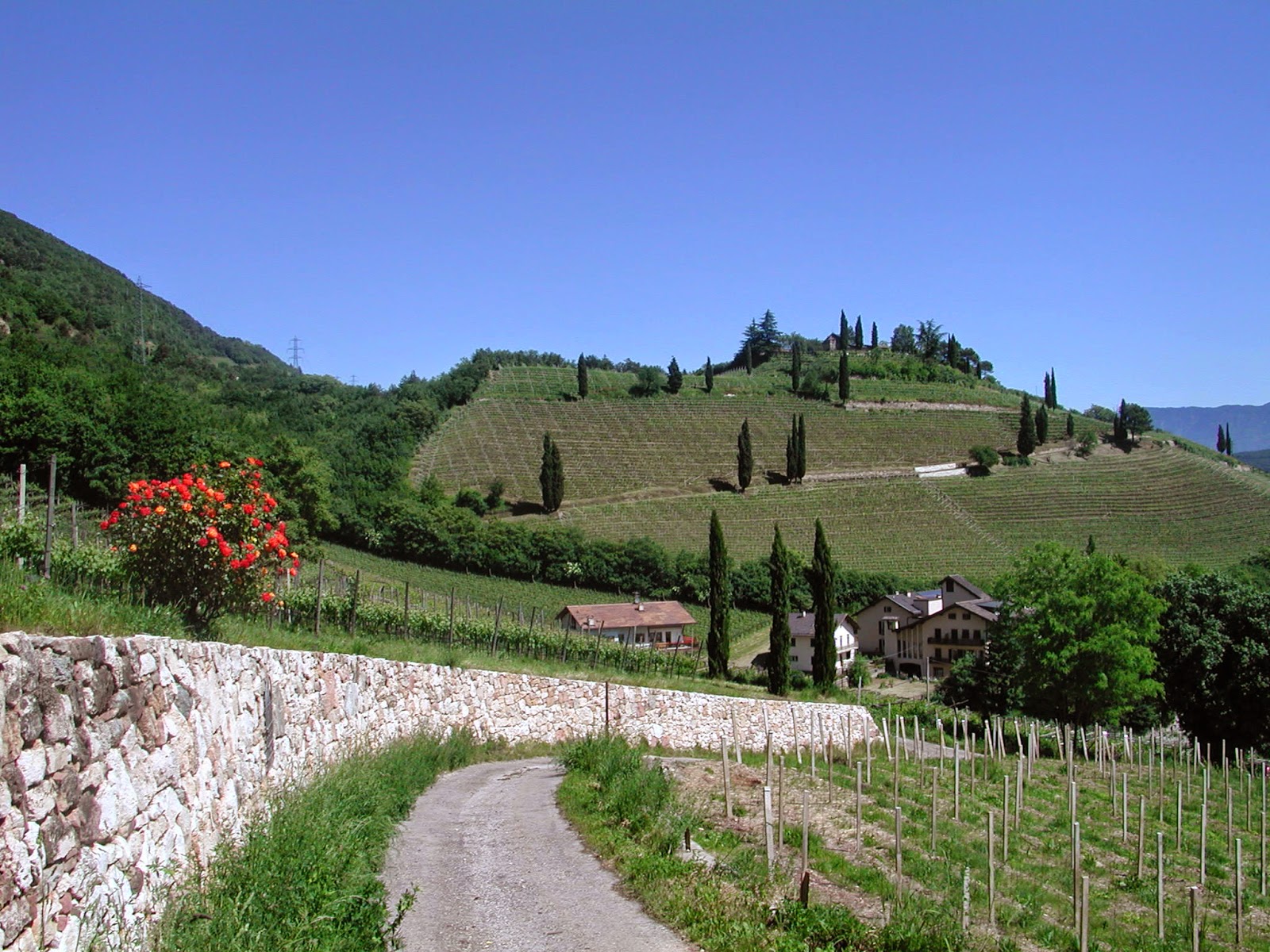