"The Cape had an unusual winter which started well with very good rains in May and first part of June. July, traditionally the Cape’s wettest month, turned out to be one of the driest and warmest on record! Year to date rainfall is 25% down on the 48 year long term average for Stellenbosch, but spring looks as if it is going to be wet season. A mild, cool spring could set the stage for good aromatics in both reds and whites for the upcoming vintage. 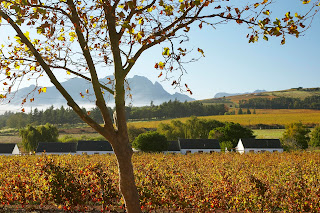 At present the cellar is blending the 2010 Cab/Shiraz (we think the best vintage ever made - a cracker!) which will take all of a week. Our labeling program is ongoing and on the increase as seasonal sales pick up. In the next few weeks we will start to remove the 2010 premium reds like Cabernet Sauvignon, Merlot and Shiraz as their time in barrel comes to an end after having rested there for between sixteen and eighteen months. They will be prepared for bottling in October/November 2011. The 2011 Riesling and Sauvignon Blanc are still soaking up the richness and flavours of the lees in their respective tanks and probably will remain sur lie till end of this year.


At this stage conditions are looking promising for vintage 2012. Bud-break has been uniform and consistent allowing for even ripening later. Young Chardonnay already has 10-15cm shoots and the visible crop looks good."
Written by Carl Schultz, Winemaker at Hartenberg, Stellenbosch, South Africa
Posted by Claire Scott-Gall