DO Ribera del Duero
"In contrast to 2010, when some parts of the region experienced severe frost damage, there were fewer incidences of adverse weather for Ribera del Duero this year. However, there was some concern when hail and heavy rain struck the region during three separate incidences in May. The most serious of these hit the central Burgos area on May 11th. 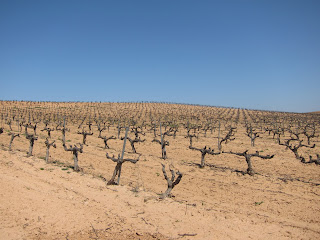 In general the weather was warmer than usual throughout the growing period with the exception of July. “Soon after bud break the temperatures were very high and the vines developed quickly. The higher temperatures and lack of rain resulted in healthy grapes and we started the vintage three weeks earlier than usual on September 16th,” said winemaker Jorge Bombin at Legaris. He added: “The wines are showing surprisingly intense colour, ripe black fruit flavours and they are both structured and round in the mouth.”
At Cruz de Alba, winemaker Sergio Avila was also pleased with the outcome this year after it took just five days to bring in the grapes. He said: “The musts are  slightly less acidic than in 2010 but they are very aromatic and robust. We are very satisfied with the results.”
2011 harvest: Provisional figures indicate a far more generous crop of 96.5 million kg this year in contrast to 71 million kg in 2010."
Wines from Spain/Patricia Langton www.winesfromspainuk.com