The Loire – land of eggs, Cabernet and windmills


A couple of weeks ago, Rob (@LuckyRobb99) and Anne (@annecathelineau) from our London Trade team headed off to sunnier settings: the Val de Loire. With suppliers from the coastal Muscadet to the continental Pouilly-Fumé 240 miles east, they were spoilt for choice. They opted to explore the road less traveled and found themselves in the land of eggs, Cabernet and windmills.

"We headed off to the arguably less well known end of the Loire, to the Appellations of Anjou, Saumur and Vendeé to see, first-hand, how our relatively new growers work and are set up. We started with Jeremie Mourat in the Vendée and it soon became obvious that he is a big fish in a small AC pond. Very forward thinking, experimental and rigorous in the way he works, crafting high quality wines across his estate. His unusual but very drinkable white Pinot Noir was universally enjoyed, matured in clay eggs to allow similar slow oxidation / development as oak barrels but with no woody flavour impact. 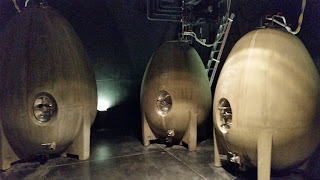 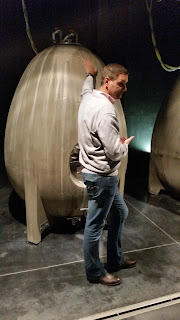 We were driven up to the highest point of his vineyards where the iconic and eponymous “moulin” of Le Moulin Blanc sits, to see all over the vineyards enjoying a beautiful, sunny (work) day. 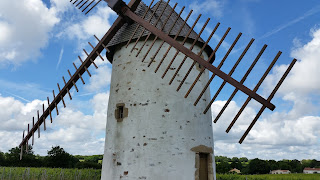 A post-travel rest was swiftly followed by a pre-dinner tasting, featuring the Vouvrays of Bernard Fouquet, then supper in Saumur - just three days before Le Tour de France rolled through. I think ours was the more enjoyable time.

Breakfast demolished, we were off to taste the wines at Château du Hureau. Slightly concerning to hit Cabernet Franc at 09:30 in Saumur-Champigny, but the ripeness, suppleness and delicacy of the wines made them a real joy. Philippe took us around his cellar - quite literally a “cave” cut from the local tuffeau stone - tasting as we went, before tempting us with magnums and jeroboams that had laid in wait for years, maturing nicely. 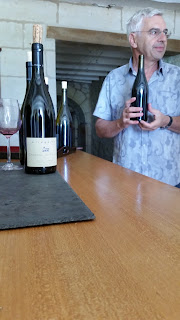 There was a little distance to travel before our last stop at Domaine Alex Cady in Anjou, so we took the opportunity to take a tactical power nap. Then, bright and breezy, we walked though the vineyards, tasted his wines and had a lunch which had been kindly made by his Mother (who also lives on the estate). The Cheninsolite, a Chenin Blanc with richness, freshness and mouth-coating texture impressed, but the 1996 SGN Coteaux du Layon St Aubin, Cuvée Volupté truly blew everyone away.

What these three young (well, 2/3!) and talented winemakers show is that tradition is there to be respected and built upon, in the constant striving to make the best wine possible - despite what nature sometimes throws at you." - Rob Allen
Posted by Unknown