One of our Yacochuya altitude-infused wines from Salta was recently mentioned in The Financial Times, written up by Peter Richards MW. 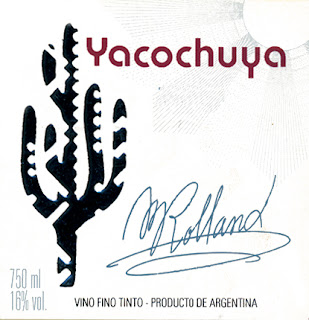 More information on the winery can be found here:
http://www.bancroftwines.com/yacochuya/


“• Yacochuya 2008, Cafayate, 15%
To conclude, one of Michel Rolland’s own wines. Rolland began consulting in Salta in 1988 and immediately saw its potential. He found an old Malbec vineyard at 2,035m altitude and this 2008 vintage shows the tobacco-scented, softened edges typical of fine bottle-aged reds. At its core, though, this is a hedonist’s wine, one for those who like maximum impact — a dense, sinewy, full-throttle red with tons of peppery spice, juicy acidity and rich ripe fruit.”

Email ThisBlogThis!Share to TwitterShare to FacebookShare to Pinterest
Labels: Argentina