We're delighted to report that, in continuation of an array of excellent scores, Vina Pedrosa our esteemed Ribera del Duero producer has been awarded an array of top points in two recent awards - including a very enviable 98 and 99 points from the Guia de Vinos Gourmets. The 2014s will be released to market very soon.

In the annual Wines from Spain Awards 2016 Ceremony, the Cepa Gallivan 2014 from Pedrosa, and the Pedrosa Crianza 2014 were award-winning wines. 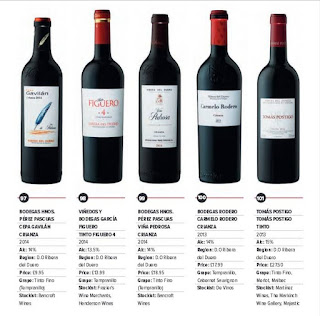 The full document can be found here:

The ‘Guía de Vinos Gourmets 2017' - one of Spain's most respected wine guides has given the following wines the following points. Over 4,000 wines were critiqued, and all blind tasted.

Cepa Gavilán Crianza 2014 – 95 points. The best score ever in this wine guide for our wine, proving its excellent price – quality.

Pérez Pascuas Gran Selección 2011 – 99 points. It obtains the maximum score in this guide, and confirms its position as one of the best Spanish red wines.

In the Peñin Guide 2017, the following new vintages were rated