Blisters Down Under - Day One Schild Estate Visit, by Jason Busby

After a 36 hour door to door epic journey with three stops (2 hours Dubai, 2 hours Singapore, 3.5 hours Melbourne), several films, a few interesting wines, lovely food and great service from the Emirates crew I arrived in the Barossa, an hour outside of Adelaide.
I was collected by the General Manager of Schild Estate Casey Mohr, who looks after exports, amongst other things. I had a quick winery visit to meet the team and then checked in with the evening off to catch up on work and get over the jet lag.
A 7.30am start with Scott Hazeldine, Head Winemaker, collecting me to go to the winery and start one of the best days I’ve had in the wine trade.
﻿ ﻿
To summarise I assisted the American winery lads Richie (full name Richard Rockwell the 3rd) and Matt with direction from Assistant Winemaker Alex MacClelland, in emptying three red wine vats after the juice had been run off as they had macerated for a week on the grape skins to gain colour and tannin structure. 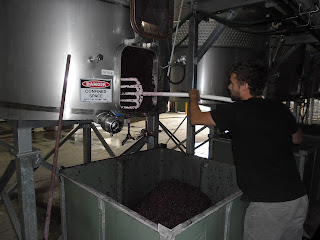 A highly dangerous job that requires an up to date electronic ‘budgie’ clipped to your belt when in the vat due to CO2, but also beware of slippery skins and blisters collected when repeatedly scrapping chunks of grape matter from vat to bin with a huge plastic rake. No disclaimer was signed so a decent corporate lawyer is being sought.
I’m not adverse to physical work as often mow my own lawn (a mere three metre squared) but you have to admire these guys particularly as the only injury I could sustain from my present role in the UK is RSI from typing. 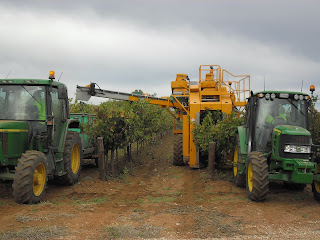 The last picking of Mataro (known as Mourvèdre in France and used in the GMS blend) came in at lunchtime which was put through the de-stemmer to rid it of ‘MOG’ – material other than grapes! Then it was pressed in the 20 tonne Vinyl bag press for a few hours very gently to get the red rich juice from the Mataro. 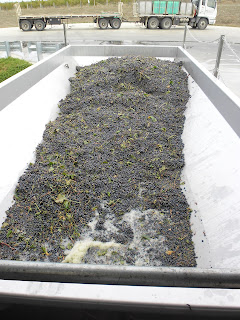 An afternoon of dry icing tanks, taking samples and cleaning, always cleaning. It seems like 90% of a winemaker’s day is spent cleaning. This was something I was already aware of but the quiet efficiency that they all go about it would make my parents proud and something the Bancroft office team could learn from when using the office kitchen!
Once cleaned and safe in the winery (safety and meticulous paperwork with the cleanliness is more than impressive) we knocked off at 5.30pm to whizz home for a 30 minute turn around – shower and change into civilian clothes for dinner with the Schild family in Tanuada, the Barossa metropolis central to the area. 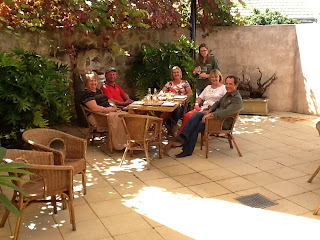 Ed Schild, the founder and patriarch who is legendary for his innovation, hard work and stories of the trade and travel, was the host with his son Michael (who runs the viticultural side of the business), daughter Judy (qualified biologist looking after the finance), lovely wife Lorraine as well as Casey. A few oysters and a mignon steak later we obviously discussed the trade at length washing the small molluscs down with the 2010 Cabernet Sauvignon, which worked as some were topped with cheesy mash and others with a little spice etc. It showed older than its age with depth and concentration I’ve never had before plus it lacked the Eucalyptus you often get (which I’m not a fan of). It must have had complexity and brilliance because I nosed it more than I quaffed it, if you know what I’m mean
Then the delightful Ben Schild Shiraz 2007, packaging complete with more bling than Puff Daddy (Diddy to the follower) ; it was dark and broody with mocha and spice and a soft, sensual, velvety palate that had me thinking of the Cadbury’s Flake adverts from the 80’s......
All in all, I had a successful, rewarding, tiring but truly memorable day. Big thanks to the Schild family and the team behind the great wines.